Traveling a bit further up the road from the Cedar Museum in Kitayama, there’s a village called Miyama with a wonderful thatched cottage that houses the Little Indigo Museum. Not simply a museum but also the studio and workroom of master indigo dyer and museum owner Hiroyuki Shindo, this is another gloriousl little treasure trove of experiences that makes this part of northern Kyoto well worth the repeated visits.

A wonderfully gracious host, Shindo-sensei invited us directly into his studio and explained its operation. In the picture shown below, you can see the dyer’s vats with wooden lids sunken into the floor in the foreground to the left, while on the right, white linen has been folded and wound around large spools, then tied tightly in preparation for shibori dyeing. 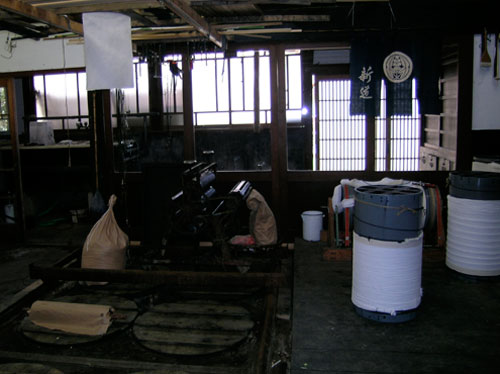 Indigo dyeing is unique among natural dye processes. Rather than requiring large amounts of fuel to generate heat, the energy for the dye process comes from fermentation. And since the herb needed to produce the dye grows easily, the dye can be produced in quantity. These two facts combined with the rich beautiful blues produced have made indigo dyeing popular throughout history and around the world. 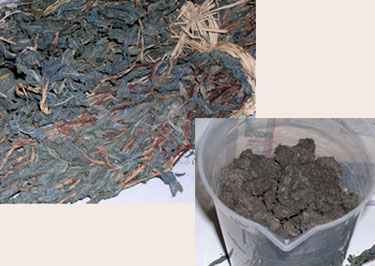 In Japan, indigo dyeing has been traced back at least to the Nara period (~700 AD) and through the centuries, the process has been handed down among dyers’ families as an oral tradition.

The indigo plant itself is first harvested and dried as shown at left. Then the plants are composted for 100 days to produce the rough pebbles shown in the bucket. These pellets are then used to establish an indigo dye pot.

Clustering the pots and submerging them into the floor is another energy conserving technique. Preparation of a dye pot can take 7-10 days as it involves a natural fermentation process and can not be rushed. The dried composted pellets are immersed in water and lye ash is used to make the solution alkaline, then rice bran is added periodically to feed the bacteria. Since the mixture must be kept warm, burning charcoal may placed in the spaces between the pots in order to keep the dyepot warm in winter, though in summer, ambient temperatures are adequate to keep the fermentation going. Gentle stirring is necessary, but exposure to excess air or sunlight can diminish the dye’s effectiveness, so the dyer’s judgement grows with experience. With careful nurturing, a skilled dyer can keep the indigo pot “alive” for 3 months or longer. 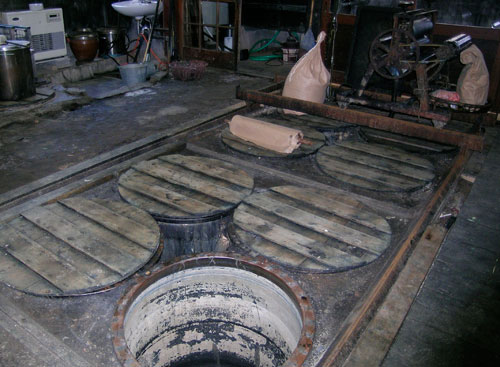 When the pot is ready, the dyeing process begins. Since the rich blue color develops not only by immersion in the vat but also during the drying process, repeated cycles of immersion and drying may be required, another area where judgement and skill develop with experience. 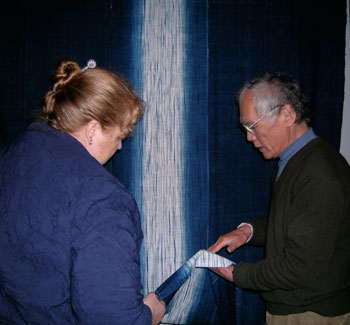 Of course, every dyer develops his or her own working process. Here Shindo-sensei is explaining the shibori indigo dyeing process he uses to Australian textile artist Wendy Carroll. And Shindo-sensei admits that indigo dyers can become quite passionate about the beautiful blues they create. Shown below is a patchwork sampler of some of the beautiful shibori effects that Shindo-sensei has achieved over his 30 years as a dyer. 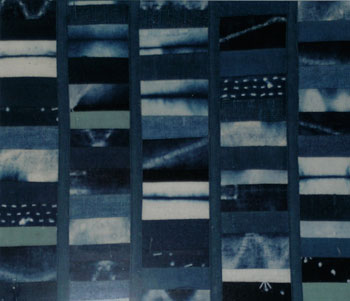 In addition to a wonderland filled with examples of his own dyework, Shindo-sensei maintains a collection of historical examples of Japanese indigo as well as a number of pieces from Africa, other regions of Asia and even woad-dyeing from Europe. Housed in the second story, the various samples hang from the rafters below the thatched roof.

Shown below is one of several beautiful indigo-dyed tapestries from Shindo-sensei’s collection.

2 thoughts on “The Little Indigo Museum”