I don’t think there is another group in Kyoto that I enjoy half so much as the Asian Studies Group. I’ve written about some of our gatherings before and since the ASG offers so much enrichment to my experience of Japan, I doubtless will be writing about them again and again. We had our annual New Year’s sake tasting again this January and it was just as wonderful as it was in years past. But I don’t like to repeat topics, so having written about last year’s sake-tasting, I decided to forego a description of the 2010 shinenkai. Here I’ll talk about February’s gathering: A wonderful presentation on the history of mechanical toys called karakuri. 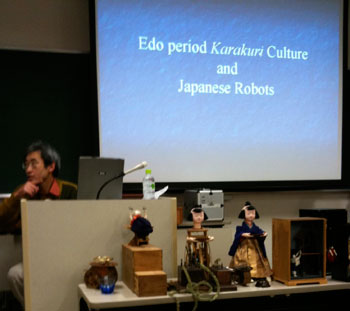 Our lecturer, Murakami Kazuo is a freelance journalist who specializes in the history of technology in Japan and the author of many works on karakuri. Shown here at right before the lecture began, Murakami-san outlined the earliest development of automated devices in Japan.

“Karakuri” is variously translated as “automata” or “mechanical puppet” (although not every karkuri device was given a human form). However, the word also carries the meaning of “to tease or trick or surprise”. This is because the mechanisms that powered these automata were generally hidden or disguised, which gave their actions a magical entertaining quality. As shown in the print below, an Edo period family is being entertained by a variety of performing mechanized dolls. The small figure in the foreground of the right panel is the most famous of the karakuri known as the “tea-serving doll”. Powered by a spring device and containing a balance mechanism in the arms, the doll could hold a cup of tea and move forward to the guest, who would receive the tea. Lifting the cup from the doll’s arms, would cause the device to stop moving forward. Then the guest would drink the tea and return the empty cup to the doll. The lesser weight of the empty cup would cause the doll to turn around 180° and move back to the host—a charming facilitation of the hospitable interactions between host and guest. 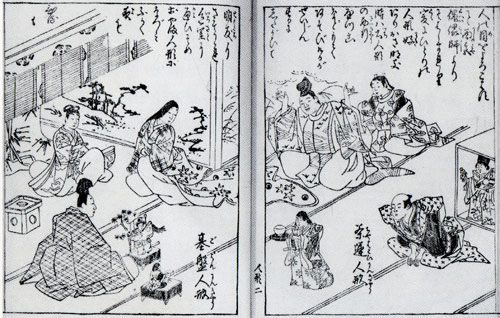 The Edo period (1603-1868) marks approximately 250 years during which Japan was completely isolated from the rest of the world. And during this time, Japan’s unique cultural heritage developed away from outside influences. There was however some limited trade with China and the Netherlands, though the latter group was isolated to the port of Nagasaki. Although the Tokugawa shogunate, which ruled Japan during the Edo period, established strict control of not only foreign trade but also the internal population, the period saw a great rise in wealth among townspeople and merchant classes. Accompanying this increase in wealth came a desire for lavish and more accessible forms of entertainment. And against this background, the karakuri culture of the Edo period flourished.

A hundred years before the most stringent trade restrictions were introduced in 1663, the earliest Portuguese missionaries had already brought European clocks to Japan in 1551. But however curious and interesting these mechanical clocks might have been, the European system of marking time differed from the existing Japanese system. As these new-fangled clock mechanisms were explored and adapted for Japanese timepieces, the mechanical springs and interactions that powered the clocks were also put to a more whimsical use as they became the technology that powered some of the most popular karakuri.

Examples of the tea-serving doll are shown below. The “unclothed” version on the left shows the intricate wooden scaffolding that housed the spring mechanism and indeed traditional Japanese carpentry skills played an equally great role in the development of karakuri. Different types of wood were used to make specific parts, with some locally native woods only appearing in karakuri manufactured in that region of Japan. The cut of the grain of the wood is very important, for example the grain of the wooden driving gears is radially arranged to provide equal strength in all directions. The schematic shown on the right is an illustration from the three volume set, ‘Karakuri – An Illustrated Anthology’ published by Hosokawa Hanzo Yorinao in 1796. The anthology explains the making of four types of Japanese clocks and nine types of mechanical puppets and provides precise diagrams. Thanks to these manuscripts, knowledge of how these mechanical devices were constructed has been preserved. 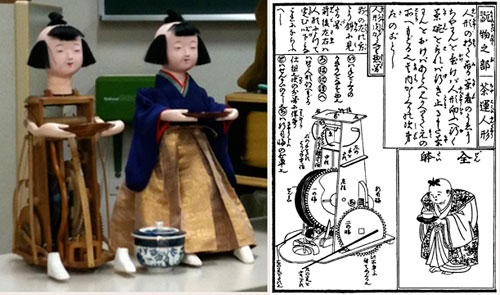 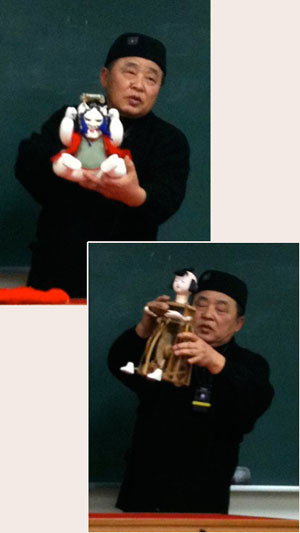 Following the lecture, we were treated to a demonstration of numerous antique karakuri. Minasaki Sougo, shown at left, is a specialist in mechanical devices of the Edo period. He also restores these devices and is also one of the few remaining craftsmen who still make these automata, mainly dolls, today.

Though I’ve spent considerable time describing the tea-serving doll, which is considered the most popular and best known of the karkuri, it was by no means the only type. Sougo-san demonstrated quite a wide range of performing dolls—archers, dancers, tumbling acrobats. Not all of these were powered by the spring mechanisms described above. The acrobats, for example, often contained a capsule of mercury within their hollow wooden bodies. When movement was initiated with a slight tap, the inertia of the mercury movement within the doll provided the momentum that kept the doll tumbling forward.

But karakuri should not be dismissed as merely curious playthings from history. Some of the most famous karakuri makers were the greatest engineers of their day, interested and involved in a wide range of technology. Tanaka Hisashige, perhaps the best known karakuri maker, also experimented with pneumatics, hydraulics and was interested in astronomy. Sometimes called the “Thomas Edison of Japan”, Tanaka designed and built Japan’s first domestically made steam locomotive and steam warship even though he had only read reports of steam engines and seen but one demonstration of a Russian steam-driven device. His family business, the Tanaka Engineering Works, later evolved into the company that is now known as Toshiba.

The legacy of karakuri culture has not only had an impact on industry but also a continuing impact on Japanese popular culture, on Japanese attitudes toward mechanical devices—particularly those taking human form. The Japanese love of robots is rooted in karakuri culture, which encouraged a belief that robots are a friendly, benevolent and entertaining way to facilitate positive human interactions.

One thought on “I, karakuri”