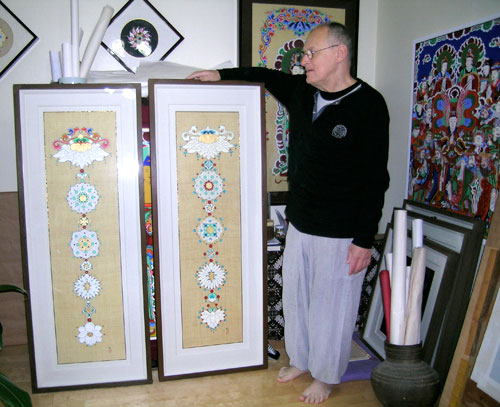 Last weekend I managed a brief getaway with three of my friends: Wendy Carroll from Australia, Kazuko Horiuchi from Chile and Judith Clancy, who was once upon a time from New Jersey. And our trip was indeed a delight. We flew off for a weekend in Seoul, South Korea.  Although I had been to the Korean port city of Pusan many many long years ago, I wasn’t really prepared for the melange of flavors and textures that greeted us on our arrival. We stayed at a traditional Korean inn called the Tea Guest House in the neighborhood of Insadong, which was a mix of traditional and modern buildings as shown by the images below. 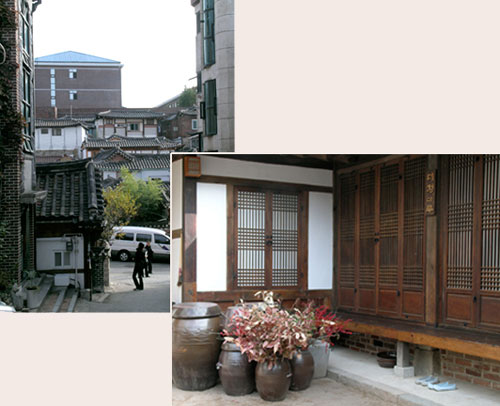 It was only an hour and a half flight from Osaka to Seoul, but there was a two-hour trip from Kyoto to the airport early in the day and a two-hour bus-ride from the airport in Seoul to our guest house in Insadong. So we were a pretty weary group of travelers by the time we checked into our lodgings. But we quickly found our way down the street to celebrate our arrival with a feast of Korean sea food at a restaurant that had been recommended by one of Judith’s many friends. 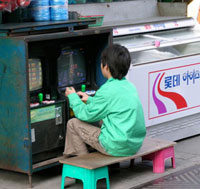 Seoul boasts of having the world’s best Wi-fi access and broadband connections with mind-boggling download speeds ranging up to 100Mbps, so it was amusing to see this young boy playing street-side video games in front of the local grocery store as we scouted out the city the next morning. 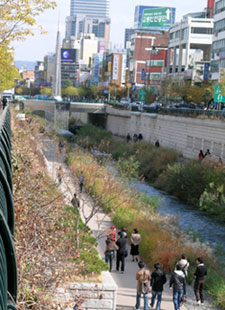 In the center of Seoul, there’s a branch of the Han River that had been paved over during the rush to modernize. But with the 21st century preference for green cities, a major reclamation project was initiated to tear down the elevated freeway and restore river as a sunken riverside park for city residents to enjoy.

We spent most of Saturday walking around Dongdaemun Market, one of the major shopping areas in Seoul. When we set out in the morning, we blithely started off to the gold district to buy earrings…and arrived to find block after block after block lined with stores selling every manner of gold adornment. And though we could have easily spent the day there playing with gold till our heart’s content, we decided to press on deeper into the heart of Seoul’s shopping district. Or rather I should say, one of Seoul’s shopping districts. We never made it to Namdaemun Market, Seoul’s other older shopping district.

We walked for hours. There was a lamp district, where all the stores sold lighting, and a plastics section, where you could buy anything made of plastic. Sheet metal fabrication shops were clustered in another area we walked through. An area that seemed to sell only towels for blocks and blocks. And bedding covered another area.

For lunch, we finally stopped to eat at one of the food vending stalls that line the edges of the street. And again, the variety was enormous. The stall in the foreground offered chestnuts: roasted, candied and batter fried. Other stalls offered noodles, tempura or sausages. Still other stands sold bags of traditional sweets made from puffed grains and/or nuts sweetened by honey. These were so reminiscent of granola that we wondered if Korea had provided the original inspiration when that cereal was introduced to America in the 1960s. 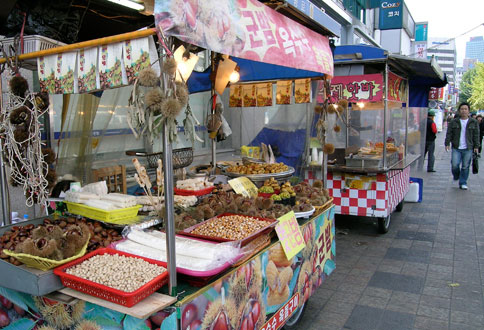 Then finally we came to crafts and fabric. Was I in heaven?

When there was lace, there was lace galore. And ditto with yarns and buttons and ribbons and tassels. Each bit of craft had it’s own area with more choices than I could possible sort through or savor over if I’d had a month of Sundays. All in all, Dongdaemun Market is comprised of 20 shopping malls (with fashion segmented by floors), 30,000 stores, and around 50,000 wholesalers. If you want it, they’ve got it.

Sadly though, there was not enough time to drink it all in. We had barely found the embroidery section when it was time to go. The time allotted to our shopping spree was over. At least for the moment anyway. Having discovered that such delight is so close, I’m sure I’ll go back again.

And that was only Saturday, but it is enough to fill one blog-post for tonight. I’ll have to write about Sunday later. 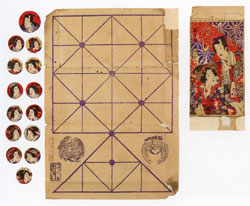 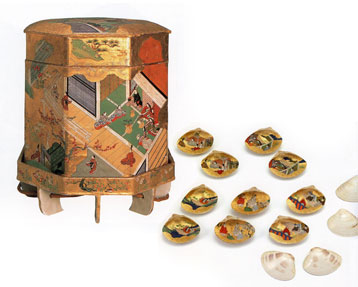 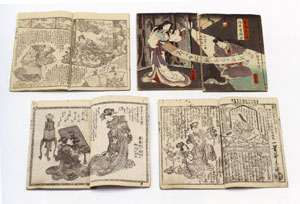