It’s hard believe it’s November already. The summer days that passed so slowly, now seem to have fled quickly after all. The multiple days of drenching downpour in early summer gave way to a seemingly endless procession of high heat and even higher humidity. Each day one of my co-workers would remind me of the record-shattering duration of the heat-wave that blurred from one day into the next. And so the summer dragged by with most days best spent in in-door hibernation. And though I can say I honed my sewing skills to a higher polish, there were seemingly few adventures to write about.

Perhaps though, a lucky cat crossed my path at Isetan Department store, where I saw a series of 19th century woodblock prints that comprised an exhibition called Nyanto mo Neko Darake (Cats of Many Varieties). In the west, it is said that a cat has nine lives, but in Japan, cats are thought to have a thousand lives and all 1000 lives were on display in this show. 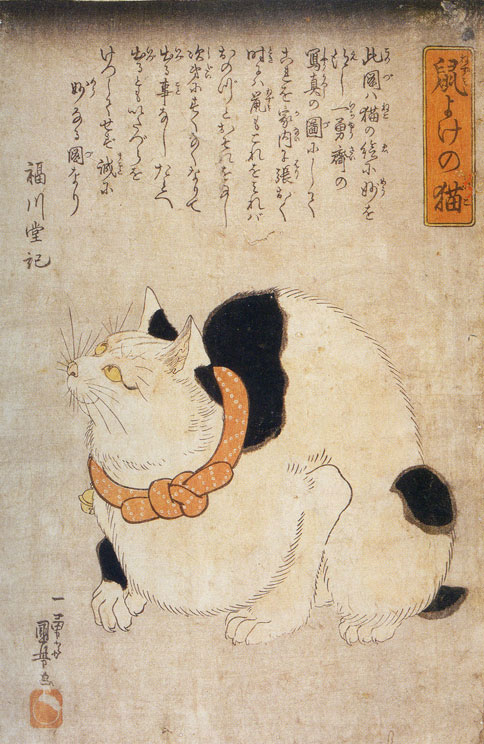 It may seem strange to think of museum quality art being exhibited in a department store, since the average consumerist mentality might not readily pair art-viewing with shopping. But department store art galleries are a common and charming feature in Japan. In Kyoto, all 4 of the major department stores contain galleries that host high quality traveling exhibits that range widely from historic to contemporary, foreign and domestic art and crafts of all kinds. All of which offer afternoons spent in a languorous mixture of gallery hopping, cafe lunches and shopping. And I must hasten add that those department store galleries supplement the National, Prefectural and City Museums as well as a plethora of privately funded museums and galleries. All of which combine to make Kyoto an art-lover’s paradise serving up a constant and every changing menu of visual treats.

Here I present a few of my favorite prints from the show. If you click on each image, there’s a larger pop-up version so the exquisite details will be a bit easier to see. Though in truth, no reproduction could really do them justice. 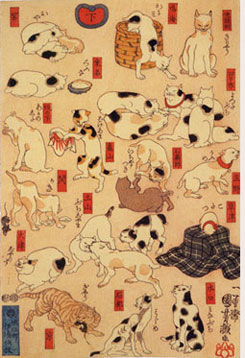 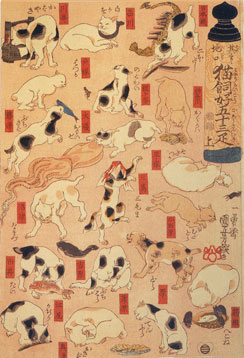 One of the artists featured most prominently in the show was Utagawa Kuniyoshi, who was legendary for his love of cats. It is said that his studio was overrun with them and cats figured prominently in many of his works, like the panels shown above. These are two of the three panels of a triptych called “Pet Cats shown as the 53 Stations of the Tokaido”. The Tokaido, which translates as East Sea Road, was a much travelled road connecting Tokyo with Kyoto. Travel was mostly by foot and the 53 stations were designated rest areas for travelers walking this long journey. The Tokaido was an enormously popular theme in Edo period art and poetry. So while we might only see a collection of cute cats, Utagawa’s contemporaries would have been more amused by this droll wit in using a cat pose to capture the individual sense of each of these rest stations. 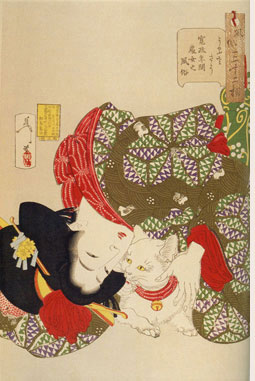 Many of the images in the exhibit portrayed bijin (beautiful people) with their pets. The image at left is by Tsukioka Yoshitoshi, who was actually better known for his graphic violence and ghosts than for bijin. But here he has portrayed a courtesan pampering her pet, but looking closely you can see that the cat’s collar is made from the same fabric as the collar of the woman’s kimono. Pictured with her back arched as she bends over her little darling, one can wonder which one of the two is being represented as the pampered pet. 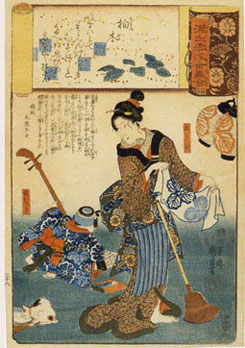 At right, another print by Utagawa Kuniyoshi shows an obviously less pampered woman supervising her child’s music lesson, feeding the family pet and tending to the housework all in the same moment. 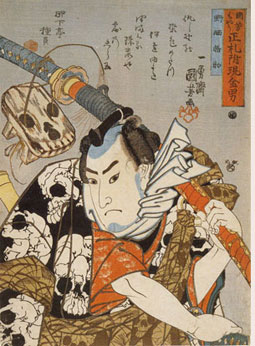 While images of beautiful women comprised a lucrative genre for printmakers, not all of these portraits were women. Kuniyoshi did an extensive series called “Typical Types of Manly Fellows in Kuniyoshi’s Style”, one example of which is shown at left. During the Tokugawa period (1603-1867), government censorship extended even to woodblock prints and other forms of popular art. But it has been suggested that this censorship only served to further spur Kuniyoshi’s imagination. In seeking ways to circumvent the government bans, Kuniyoshi developed an inventive graphic subtext that carried throughout many of his works, which became known as hanji-mono (“riddle pictures”). And to further confound the censors, some of these riddles seemed to contain political metaphors while others appeared to be purely for entertainment. Can you find the cats in the image at left? Click on the image and then look closely at the skull pattern that decorates the man’s kimono. 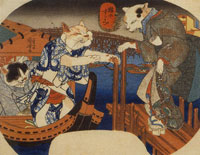 In fact, Kuniyoshi was considered unique in his mastery of action-packed images drawn from history, religion, folklore, and myths of Japan, China, and other Asian countries; he also experimented with European techniques of visual representation, such as linear perspective, as well as exotic foreign subject-matter. He was also known for his comical pictures of animals impersonating humans, like the one shown decorating the fan at right. 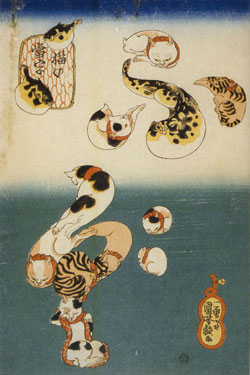 And here in another of Utagawa’s works, a series of cats form the dots and strokes of the hiragana letters ふぐ (proounced: fugu), a seafood delicacy pictured in the upper right corner of the sign along with the name of the restaurant for which the sign was made.

But cats also have a darker side to their mythology, and there were many artists who focused their attention on the occult of the cat. The wonderful print by Utagawa Yoshifuji shown below is aptly entitled Tale of the Cat Monster. Note the wonderful bells for eyes and collection of crouching kittens arranged to make the face. 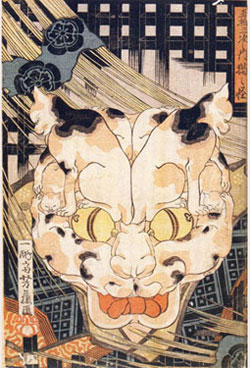 There is a section of Japanese mythology in which cats have supernatural powers with the ability to shape shift and control the mind. Cats are also considered to have power over the spirits of the dead and spectral cats can grow to gigantic size capable of terrorizing whole villages, even though they are barely visible. Such wonderful goblin stories of course made their way into Japanese kabuki plays and since theatre scripts were a popular form of e-hon (picture books), images from kabuki made its way back into woodblock prints used to illustrate those books. 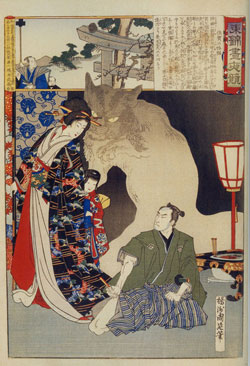 A scene from one such play called “The Cat Monster of Saga” is illustrated at left by Yoshu Chikanobu. As the story goes, Nabeshima Naoshige takes over Saga castle by brutally slaughtering the entire Ryuzoji family, including the pet cat named Tama. The ghost of Tama then becomes an vengeful spirit, seeking a terrible retribution for the deaths of his owners.

In every print throughout the show, whether it depicted a playful kitty or a powerful demon, the elegance of the woodblock carvers’ skills gave exquisite expression to the elegance of the cat. In some cases, the lines were so delicately drawn one would think they had been individually painted using a brush with only a single hair. It was almost inconceivable that such delicacy had been carved in wood and repeatedly printed hundreds of times hundreds of years ago.