It’s been a long time since my last post. Life has streamed by in a blur of cherry blossoms, rainy days and mad sewing sessions as I prepared for my annual trip to the American Embroidery Conference in Marietta, Georgia. And then of course, the return from my travels was followed by the inevitable battle with jet lag, but when I saw the announcement that the Kyoto Museum would be hosting a kimono exhibition from the Ikeda collection, my little soul just perked right up.

Shigeko Ikeda has spent a lifetime collecting the most beautiful antique kimono and now portions of her collection are occasionally exhibited in museums throughout Japan. One of my goals is to visit her gallery in Tokyo someday, but until then I savor any opportunity to see any portion of the collection that finds its way down to Kyoto for an exhibit. 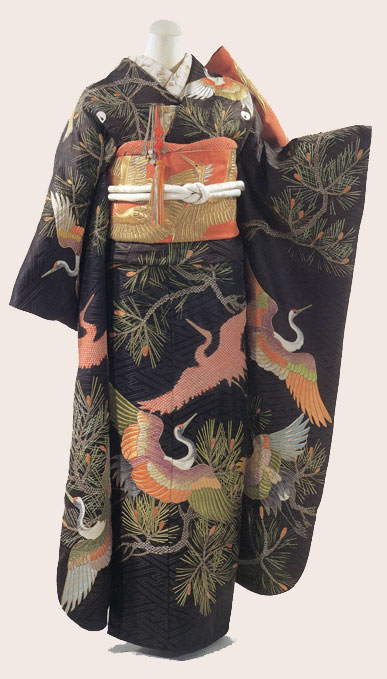 One of the things that sets an Ikeda exhibition apart from others is that the kimono are displayed not flattened out like beautiful wall hangings in isolation from their context, but on mannequins fully accessorized in every glorious detail as they would have been worn by the very stylish people who originally owned these garments. 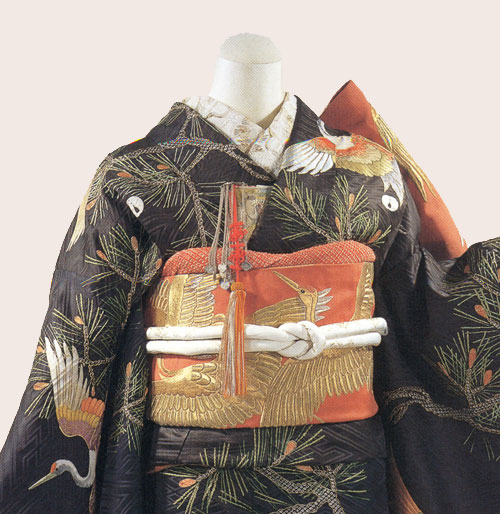 Not only is it possible to observe the choice of color combinations and coordination of motifs, but also the exquisite attention to detailed craftsmanship that makes each component of the ensemble a work of art in itself. 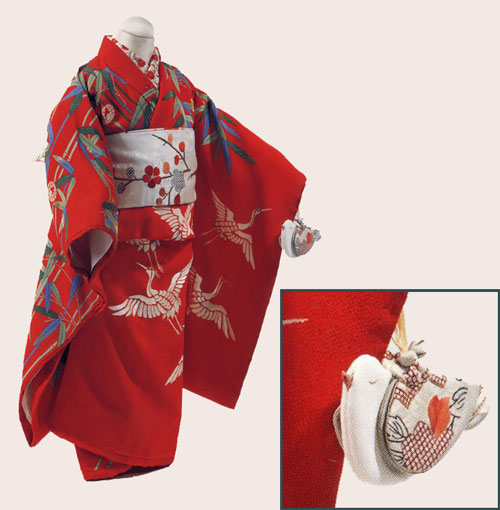 This child must have looked just darling on some special occasion when she was all dressed up in her little kimono, complete with a bird-shaped purse that complements the bird motif on her clothing. A close up of the purse is shown in the inset so that you can see it a bit more clearly.

Purses, in fact, were a special focus of this particular exhibit. With many many glass cabinets filled with numerous elegant examples on which to feast my eyes. 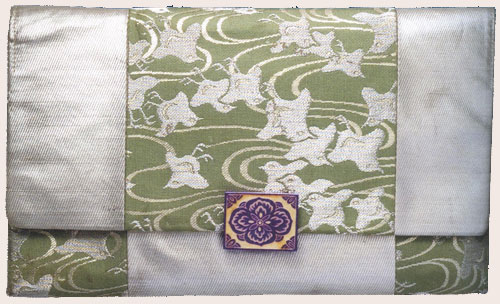 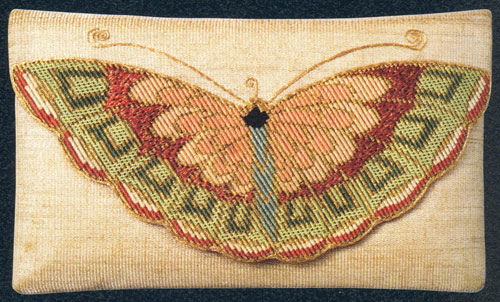 The two clutch purses shown above could so easily be evening bags with any western outfit. I especially love the butterfly embroidered across the front flap of the purse in the lower panel.

But my embroiderer’s heart was really stolen by the antique wallets shown below. If you look back at the pictures of the woman’s kimono above, you can see how she wears one of these wallets tucked into the front overlap of her kimono just above the obi. In other examples, smaller wallets were tucked downward into the obi itself. 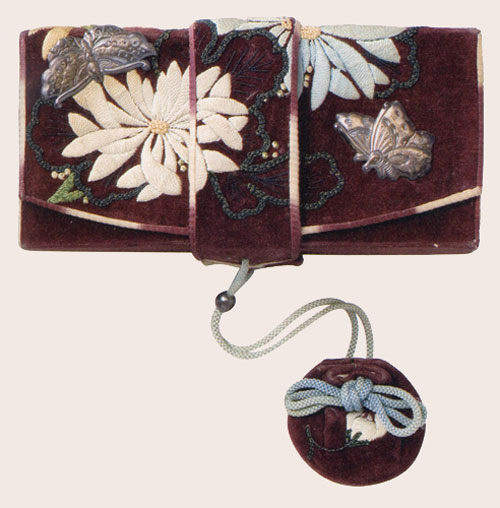 Notice on each of these how the embroidery on the band closure matches the imagery on the flap. This particular bag also has metallic butterfly embellishments. 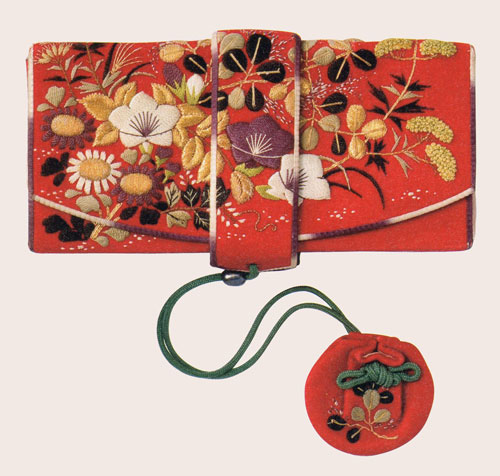 And here on this orange wallet, there is even a tiny detail trailing off the left corner of the flap onto the body of the purse. 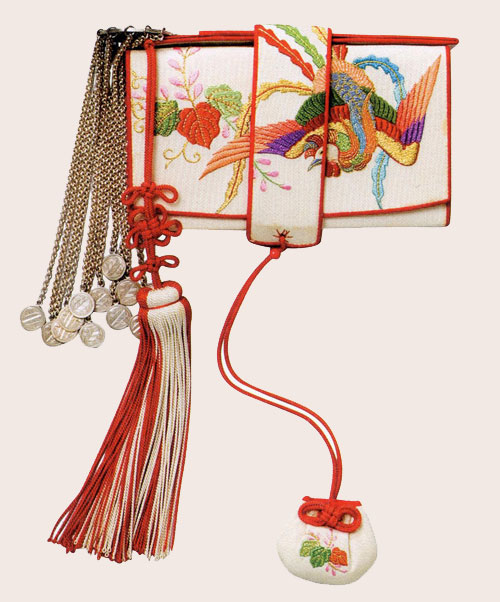 But this one, I thought, was the pièce de résistance. Though I couldn’t show it here, the tail feathers trail across the top and over to the reverse side. And of course, those multiple tassels in metal and knotted cording are just amazing. I will have to follow up with some friends to find out whether these serve some particular purpose or are purely decorative.

All in all, I dream of trying my hand at replicating some of these little bags. At least, I think it would be so much fun to try. 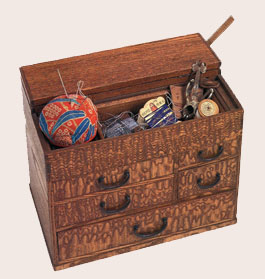 Recently I caught a lovely little exhibit called “A Mother’s Touch”, focused on the interaction between sewing and mothering across China, Korea and Japan.

Along with all sorts of lovely little toys and trinkets that women sew for their children, the exhibit included an assortment of sewing boxes and baskets used in various parts of Asia. 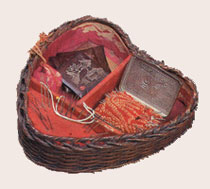 The beautiful wood grained box shown above is one of the styles typical of Japan, while the heart-shaped basket at right is from China. The sewing tools below are from Korea. 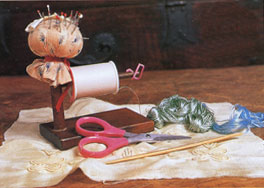 Whether a simple basket, a fold of paper or an elaborate wooden box, each of the displays reflected the attention women paid to caring for their needles and threads. And both the containers and their contents often revealed not only the cultural differences but also the cross-cultural universality of sewing. 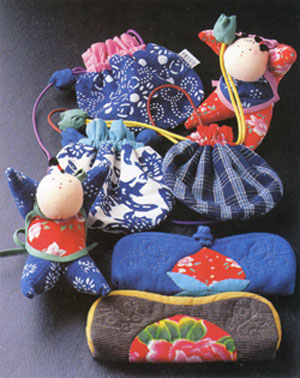 But the main focus was on the wide variety of hand sewn children’s clothing and cloth toys women made for their children in the countries covered in the exhibit, hence the name “A Mother’s Touch”. Shown at right is a collection from Japan featuring pouches in various styles as well as a few traditional rag-doll babies, all made from an assortment of kimono remnants.

Below is a young boy’s kimono from solid and checkerboard indigo beautifully embroidered with elaborate sashiko designs showing the mother’s wish for her child to be blessed with both wealth and longevity. Note the use of white thread against the blue and blue thread against white. 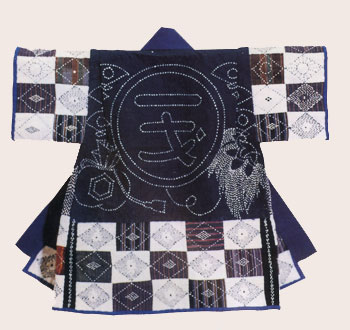 Sashiko is one of the Japanese embroidery techniques that has become better known in the west. It consists of small evenly spaced running stitches outlining the design and may be purely decorative, as shown in the example at left, or may be used to patch, repair, reinforce or quilt layers of fabric for use in clothing and housewares.

Photos of women stitching, like this Chinese grandmother, were sprinkled throughout the exhibit. 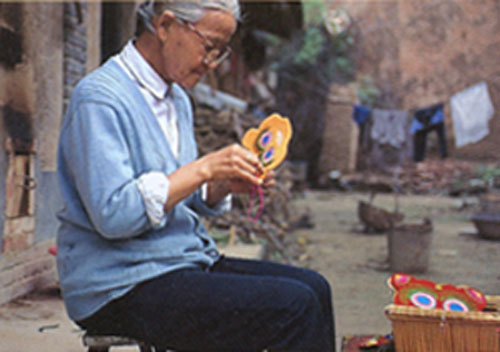 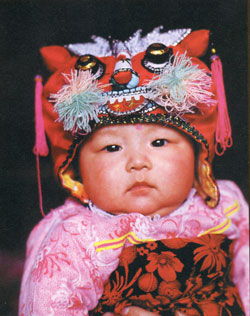 In Guanzhong Region of China, infants and young children are adorned with fabulous little hats embroidered with animal faces. As in many agrarian societies, the mortality rate is high for young children giving rise to a mythology that when demon-spirits looked down and saw a beautiful child, these demons would become jealous and snatch that child away. Thus, the animal hats were an effort to disguise the children, to hide and protect them from jealous demons. Of course, knowledge of disease and medicine has supplanted such mythology, but the tradition of these cute little hats has continued, though I am told that it is, like so many other hand arts, on the edge of disappearing as technology advances.

The individual hat designs are derived from papercuts like the one at right. Folded paper is cut freehand to develop a symmetrical design based a combination of abstract and natural forms. The resultant design is then colorfully re-interpreted with needle and thread making each work a unique piece of art. 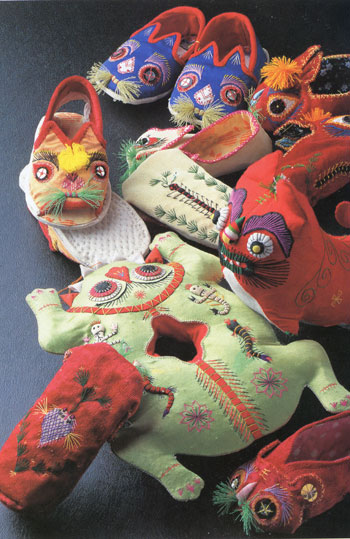 But the application of this technique is not limited to children’s hats. At left are a few more examples of little slippers, stuffed toys and pillows. It’s a beautiful folk art that I’d like to investigate further.

With each piece in the exhibit, you could feel the love that added with every stitch—a visual celebration of the bond between mother and child.

And with that thought, may I wish you all a Happy Mother’s Day!