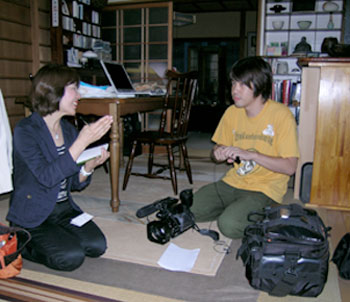 Cherry blossom time is such a special season in Japan, I’m glad to have gotten home in time to enjoy it. The trees in the park near my home, and indeed all over the city, seem to suddenly burst with blooms and everywhere there are picnics with happy people enjoying the advent of spring. It is good to be home after my travels.And where, you might ask, have I been? Where else but the American Embroidery Conference in Atlanta, Georgia, of course. 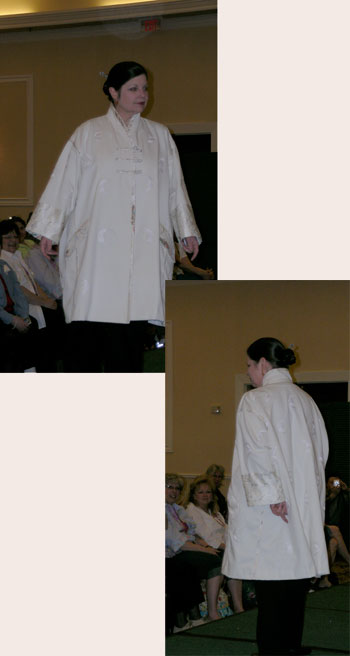 After a year of anticipation and months of preparation, I spent last week seeing old friends and making new ones at the annual AEC. And what a conference it was, with tons of opportunities to learn from each other and from the marvelous line up of teachers organized by Dianne Pomeroy, the AEC conference coordinator.I studied Embird Studio with Amy Webster, multi-hooping with Jeannie Miller, problem solving with Terri Hanson, embroidered a shawl under the guidance of Santi from Hatched in Africa, and was inspired to achieve greater heights of style by Bobbi Bullard and Sue Lord.

At left, is my own little fashion show entry — a denim kimono. Made with white denim trimmed with a printed polyester, it features multiple repeats of a snowy egret motif that I digitized myself and was gratified that my effort received lots of nice attention from my fellow conference partcipants. Since white on white embroidery can be a bit hard to see from the runway, a closer view of the motif is shown at right below. 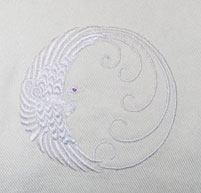 And now that the conference is over, it’s already time to start anticipating next year! Since Dianne makes a habit of out-doing herself each year, who knows what amazing classes will be in store for us in 2009. And in the meantime, I’ll take everything I’ve learned and every bit of inspiration I’ve gained from the 2008 conference and see how far I can go during the year to come.

Although commercial machine embroidery is well established in Japan, the home version has never really taken off here the way it has in the US and finding supplies localy has sometimes proven to be a challenge. Thread is the stuff of life for an embroiderer and during the past year I’ve tried talking to my local fabric store (but they had no interest in machine embroidery) and ordering from the US (but the shipping nearly doubled the price). Surely Kyoto with its specialized trade stores for every other textile craft imaginable must also have a store for machine embroiderers. The problem was just in finding it. 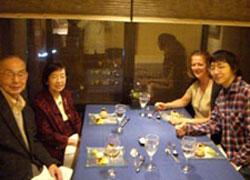 So when my friend Judith Clancy commented that she was working with Mr. Fuji to develop contacts with kimono embroidering factories for the 2008 Kyoto Textile and Design Tour, I asked her to find out where the factories bought their thread. “Oh they buy from Mr. Fuji” she responded casually. To my slack-jawed surprise, I realized that the Mr. Fuji she had been referring to is the founder of Fujix Thread, the largest thread company in Japan. Without even the proverbial six degrees of separation, I found that one of my own closest friends in Kyoto turned out to have a long-standing friendship with the Fuji family. Not only that, the company’s international headquarters are only a few blocks from my house.

My trip to Fujix Thread was the highlight of life last week. Most companies have about 300 shades of polyester thread, but Fujix, which caters to the exacting demands of the kimono industry, offers an incredible 600. The subtle progression of shades within each hue is both inspiring and overwhelming. The little picture of the color chart shown below hardly does justice to the selection.

I can hardly wait to pick up my first thread order next week. And I’m also looking forward to seeing the itinerary Judith puts together for the Textile and Design Tour next year. It ought to be a fabulous adventure! 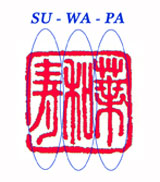 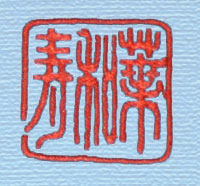 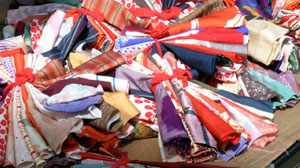