I’ve been asked several times over these last few days to suggest ways of donating to Japanese Earthquake relief, so I thought I would post a few links.

Since money contributed to various local charities sometimes takes weeks or even months to arrive at the destination, the best and most direct way to contribute to the immediate relief effort is to donate directly to JEN (Japanese Emergency NGOs). A link to their English-language homepage is shown below. The donations button is shown in Japanese yen with a drop down menu to select multiples of ¥1,000. Exchange rates do fluctuate, but at the current rate, a donation of ¥1,000 would be approximately $12.25. Online donations can be made with all major credit cards. http://www.jen-npo.org/en/involved/donate1.php

For those who would feel more comfortable donating through a familiar charity, another reliable and well organized relief effort is being handled through the Japanese Red Cross. Donations can be made through the American Red Cross: Japan Earthquake and Pacific Tsunami Relief: www.redcross.org. Again, online donations can be made with all major credit cards. Donations made through this program will be divided up among several relief projects in Asia.

To recap events to date: On Friday, March 11, 2011, a massive earthquake hit the northeast coast of Japan. It was originally graded at 8.8, then revised upward to 8.9 and now to 9.0. The earthquake generated tsunami, which struck the coastline ten minutes later. Ensuing aftershocks have in turn generated subsequent tsunami. Whole villages have been submerged and the death toll is expected to be high, but confirmations will take considerable time.

There are five nuclear energy plants in the affected area. I understand that three have been closed down safely, but problems remain at two: explosions and a partial meltdown have occurred. The level of nuclear disaster is currently being rated as 4 on an international scale of 0 to 7. (For reference, the 3-Mile Island disaster in the US in 1979 was rated as 5 on the same scale. Only one of multiple epidemiological studies performed during the 25 years since that accident has suggested any impact on longevity.)

Kyoto is a considerable distance from all of this disaster. I didn’t even feel the quake locally, though a friend of mine living here said she did feel it. My son lives in Tokyo and since the phone lines immediately went down, it was frightening to be unable to reach him for several hours, but he, his wife and my grandson are all safe.

The situation is of course, still evolving. In particular, the situation with the nuclear reactors seems to be evolving so quickly that the information becomes outdated by the time a spokesman can get on tv to deliver the update. For those who would like to keep in direct touch with developments, here are two links to NHK World Service in English. 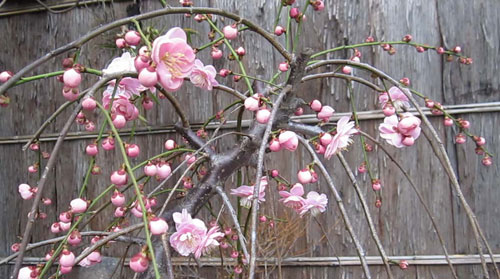 I can’t tell you how welcome it is to see plum blossoms! Like jonquils and crocuses in the west, seeing plum trees burst into blossoms is a most welcome sign of impending spring. I’ve never been a great fan of winter, so the late snow fall we had last week was enough to send me scurrying back into hibernation. But this week the plums are blossoming at Kitano Tenmangu, can spring be far behind?

It’s still blustery and cold outside, but late yesterday afternoon I bicycled over to Kitano to join the crowds who came to view the temple gardens in bloom. Although it might be better known for its monthly fleamarket, Kitano shrine has the largest collection of flowering plum trees in Kyoto. And as you can see in the photos below, it’s hard to decide whether the temple architecture provides an elegant backdrop for the flowers or the flowers make the architecture more ethereal. 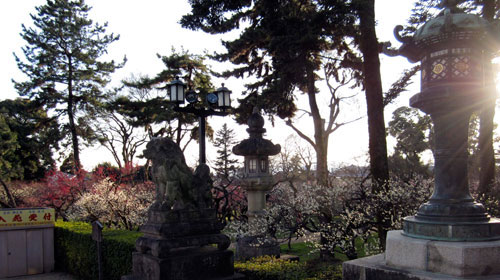 One of the largest and oldest Shinto shrines in Kyoto, Kitano was built in 947 to honor the spirit of Sugawara no Michizane, a renowned Heian court scholar, politician and advisor to Emperor Uda. It is said that Michizane was so brilliant that jealous rivals in the Fujiwara clan, fearing his continuing rise in power, spread rumors of disloyalty that made it necessary for Michizane to flea into exile. In one of the tragic episodes of loyalty, heroism and honor from Japanese history, Michizane’s servants and retainers tried valiantly to defend his wife and infant son who remained in Kyoto, but all were brutally murdered—a story that has been retold in countless Noh and Kabuki performances. 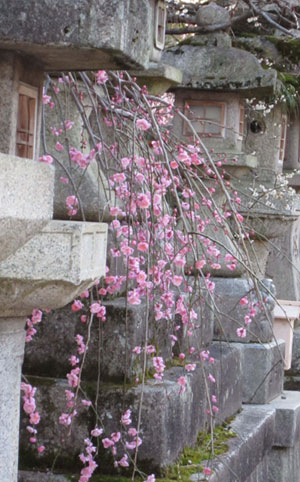 Two years later, Michizane died in exile. And shortly thereafter, Kyoto was beset by a series of natural calamities. Legend has it that in a series of dream sequences, the Emperor became convinced that these disasters were caused by Michizane’s angry spirit haunting the court, seeking vengance for the many injustices against him, his family and his household.

To protect the court, the Emperor ordered that efforts be made to placate the angry ghost. To that end, he sent emissaries to Kyushu to retrieve Michizune’s bones, so that they might be re-buried with highest honors in Kyoto. In keeping with the tradition of the time, a Shinto shrine was constructed to house his remains. In the decades that followed, the status of Kitano was increasingly elevated and the spirit of Michizane received the post mortem name “Tenjin” and is now recognized as a guardian kami or spirit. 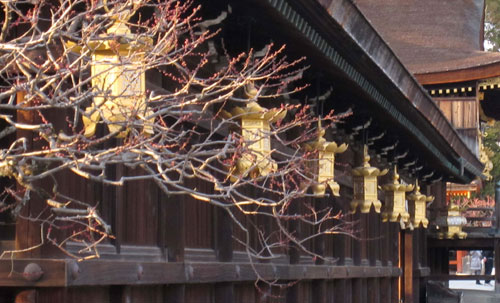 Because Michizane was said to have loved plum blossoms, the temple gardens were filled with beautiful red and white flowering plum trees. It is even said that one type of plum tree called Tobiume (flying plum) reciprocated Michizane’s love to the extent that while he was in exile, the falling petals of the plum blossoms flew on the breeze all the way to Kyushu just to bring him a brief smile. 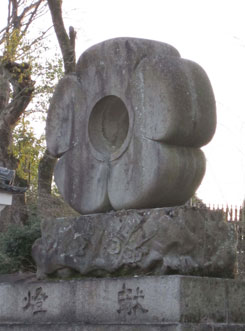 Plum blossoms are so identified with Kitano that even when the trees are not in bloom, a large stone monument serves as a reminder. The bases of many of the statues that grace the garden also depict plum branches in bas relief and the noren that hang above the entry to the main shrine buildings are also decorated with an abstract five-petalled plum motif, as shown in the photo below.

There’s even a plum blossom festival in late February, serving whipped green tea and delicate Japanese wagashi in the shape of a plum blossom, of course! And if you visit in August, you will see the courtyard filled with large tables of salted plums drying in the sun. (Though less publicly produced, plum wine is also delicious!) 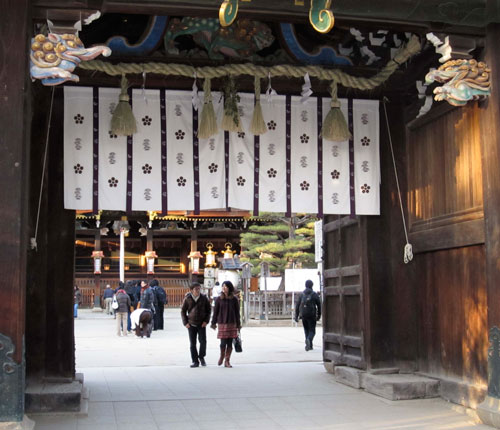 Another notable feature of Kitano is the rows and rows of lanterns. Bronze lanterns hang from the eaves in one of the photos above; stone lanterns line every pathway and walkway through the garden. 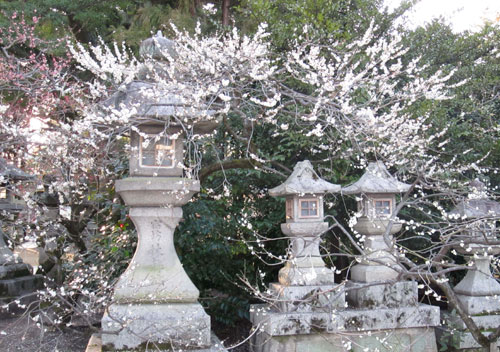 But perhaps the more surprising feature is the number of stone and metal oxen scattered throughout the garden. Under the Chinese system of indicating years using twelve animals, Michizane was an ox (like me!) Maybe that’s another reason I enjoy Kitano so much. Persons born in an ox year are thought to be notably intelligent. And so, to further honor Michizane’s spirit, these oxen where placed throughout the garden. Children are encouraged to touch the sculptures in the hopes that a bit of the intelligence will “rub off” onto them and it’s common to see parents with infants pat the animal’s head and horns, then rub their baby’s head. The elderly can also be seen rubbing the strong back or legs of the ox and then touching their own back or knees, hoping to add an extra bit of magical strength to their own limbs. 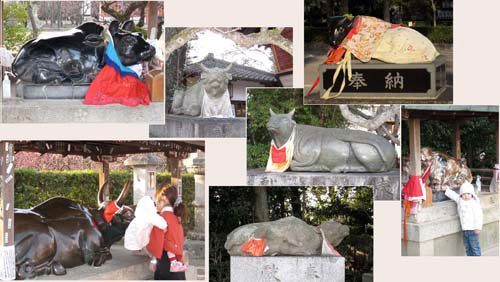 As a center of literature and knowledge, Kitano had at one time in its long history attracted the paper-making industry to the surrounding neighborhood. Although I understand that there is little of the traditional industry left in that neighborhood, a few years ago Kitano hosted a conference on Japanese paper-making traditions that several of my friends attended.

And because of its association with a patron of such high intelligence, Kitano has become a place where school children ask for blessings on their studies. At shrines across Japan, it’s common to buy an ema, a small wooden placque on which one writes their hopes or wishes. And after writing the request, the placque is tied to a wall of the shrine. At Kitano, one can see placques inscribed with childish handwriting that say things like, “please, please, please, I want to pass my math exam”. The picture below shows a schoolgirl standing before one of the many sub-shrines in the garden. 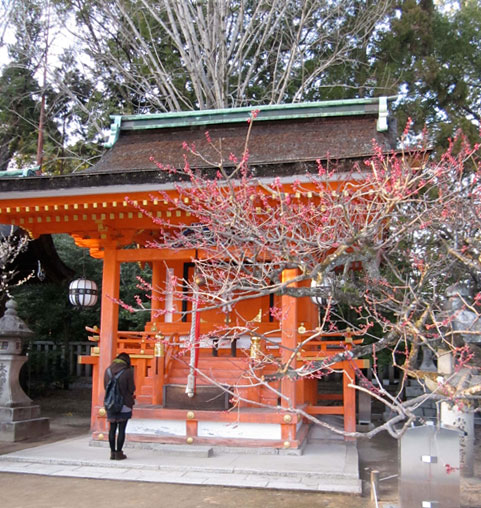 As for me though, all I’m hoping for is the early spring that the plum blossoms have promised me…