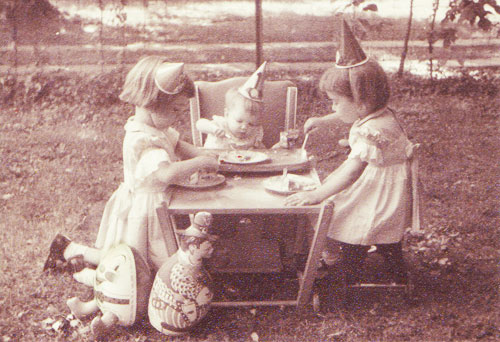 It’s hard to believe that my little blog is celebrating its first birthday, so I thought I’d mark the occasion with a picture from my own first birthday party. There I am between my two older sisters Susan and Paula on the right and left.  And now here I am, a long long way from there.

August has flown by in a blur of heat an humidity and I’ve barely found time to post, but despite the aggravations of the climate, it’s been a wonderful month of good times with great friends, lots to enjoy and lots to celebrate even though I failed to find time to blog about it all. 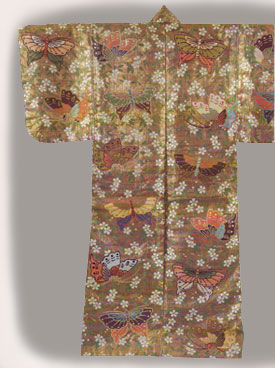 With temperatures regularly reaching 35°~39°C/95°~100°F and humidity between 60 and 80%, summer in Kyoto can be rough, which makes the archeological textile rooms at local museums a particularly favorable summertime outing. Not only are the rooms temperature and humidity controlled to preserve the ancient fibers, but also the dimmed lighting that protects the ancient dye offers a welcome relief from the summer glare. So of course, when I saw a flyer advertising an exhibition of Noh kimono at Sen-Oku Hakuko Kan, I jumped at the chance to see it. Admittedly, I’m an avid kimono fan who would have jumped at the chance in midwinter as well, but my little museum excursion did make a particularly nice respite from the afternoon’s heat. 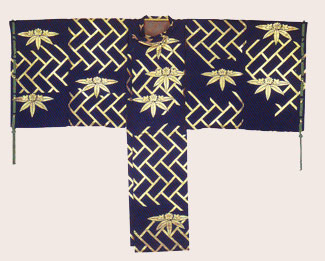 Noh is one of several theatrical traditions in Japan and dates back to the Muromachi period (c.1400-1500 AD). It’s thought that Noh evolved from a complex performance of acrobatics, dancing, music and singing that blended both the public performances presented to commoners and the solemn music, dance, and ceremonial performances at the imperial court and aristocrats’ residences. Due to its immense popularity, Noh plays drew large audiences and thus the costumes tended to feature bold graphic designs that helped to distinguish the role being played by reflecting some attribute of the character being represented.

Many of the kimono on exhibit dated from the Momoyama period and as such represent prototypes from which the tradition evolved. 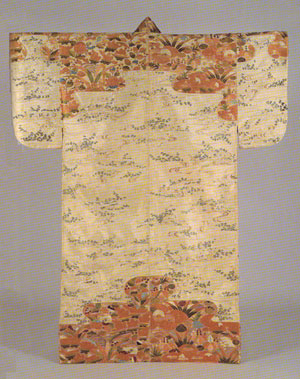 Noh robes also tend to be quite voluminous with relatively small sleeves. To some extent that reflects the prevailing structure of garments in the Momoyama period, but presumably this loose fit also facilitates quick costume changes for performers playing multiple roles. And although many of the designs appear to be embroidered, quite often they are the product of an intricate weave that manipulates dozens of shuttles to float variously colored weft threads across the patterned area. Although some of the oldest garments show a loss of pattern on certain sections as these threads have worn away, it’s truly remarkable how carefully these treasures have been preserved in a climate as humid and changeable as Japan.

Another unique feature of Noh robes is the use of color blocking as part of the design. It was the friend I saw the show with that drew my attention to that. Neither of us could recall seeing other types of kimono with such bold blocks of color that seemed to form a large checkerboard underlying the pattern. Though the example shown at left features an overall cherry blossom pattern in the foreground, many of the robes used those color blocks to bridge the seasons by placing a spring/summer pattern on one color block and a fall/winter pattern on the other, allowing greater versatility in the costume’s use throughout the year. 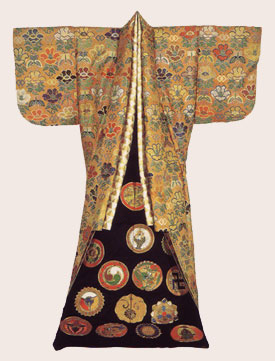 As suggested by all of what I’ve written so far, Noh costumes are among the most elaborate kimono still made. Noh is a living tradition that continues to be well loved by the Japanese people. The fabrics for modern Noh kimono are still woven here in my neighborhood of Nishijin and a new Noh theatre was recently constructed a few blocks down the street near my home. Performers wear not only these elaborate costumes but also intricately carved wooden masks. Painted with pigment and burnished to a pearl-like sheen, it is said that there are 60 basic types of masks, representing specific character types: men and women of various ages, demons, elders, warriors, ghosts and sprits etc. 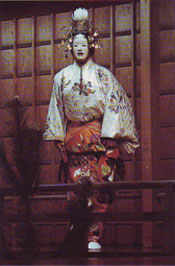 Despite the elaborate costume and mask, very few stage props are used in telling the story. Thus, the full weight of characterization relies on the actor and costume. Colors and graphic patterns in the kimono and the type of mask worn, signal the nature of the character. From there, the story unfolds in the imagination of each audience member through movement and gesture, acting and singing. Each of the performer’s gestures and movements involves an elaborately ritualized choreography and it is said that the audience’s experience of the performance is dramatically affected by the position of their seating — not just closeness to the stage itself, but also whether the seat is positioned on stage left or stage right. As with so much else in life, each position offers a uniquely individual experience.