Recently my friend and ikebana mentor Kazuko Nishikawa was invited to arrange flowers for an exhibition of maiko kimono at the Some Museum (Museum of Dyed Textiles). 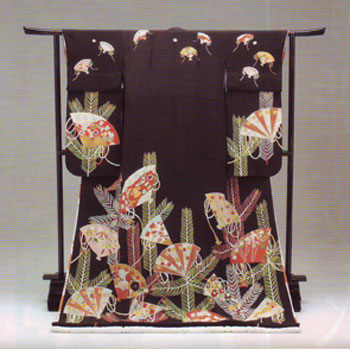 Maiko are apprentice geisha and their elaborate kimono are much more ornate and theatrical than those worn by the average Japanese woman. As befitting a young woman, the kimono are furisode style with long sleeves. And as shown at the picture at bottom, the obi also has long trailing ends instead of the more common flat square knot worn by married women. 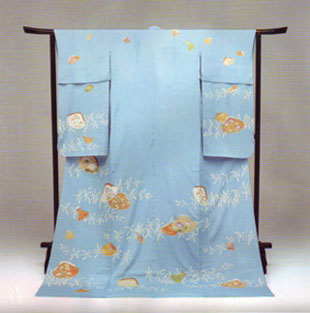 exercised by fully trained geisha, their duties mostly involve music and dance performances, which accounts for the colorful theatrical style of their kimono.

Maiko kimono are of course frequently decorated with brightly colored flowers and butterflies, but literary motifs are also common as are symbols of a traditional lifestyle. The blue kimono above features decorated clam shells, representing the kai awase game that was popular during the Heian era in the 11th century. Similar to the card game “Concentration”, the game used sets of clamshells rather than cards. Matching scenes were painted on the interior surfaces of each pair of shells, while the exterior surfaces were polished to a smooth blank, making hard to recognize which pairs would go together when all of the clamshells were placed with the painted side down. Some of the older sets contained as many as 360 pairs of shells, though simplified sets of 54 pairs based on scenes from Tale of Genji later became popular.

There are about 100 to 150 maiko in Kyoto. Most live and work in the Gion or Ponto-cho areas on the east side of town. They are considered professional entertainers and tourists flock to the area to glimpse a “geisha”, just as Hollywood tourists might hope to see a movie star. Maiko dance movements are highly stylized and use the long flowing sleeves to add a graceful flutter. The dance often represents a poem or enacts a literary scene. Click here to view a brief performance.

May is the season of shin-cha or “new tea”, when tender spring leaves are harvested to make tea. And somewhere up in the hills in the southeast of Kyoto prefecture lies the tiny village of Wazuka surrounded by emerald green tea fields. Since tea is one of the quintessential experiences of Japan, the Kyoto Prefectural International Center sponsored a tea-picking tour for foreigners last Saturday. It was a great chance for a whole bus load of us to get away from the city for a day and enjoy the rolling countryside. Most of my fellow tea-pickers were foreign students studying at one of the many universities in Kyoto. From Taiwan and Lithuania, Thailand and Ireland, the Ukraine, Italy and a long list of more places than I can now remember, the two hour ride itself was an experience in internationalism. 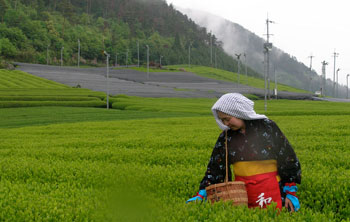 For a few of our group, there was the chance to don the traditional fieldworker’s garb made from wonderful indigo-dyed ikat cottons with layers of aprons and scarves and fingerless gloves in bright turquoise. With fewer outfits available than the number of people who wanted to wear them, we played several rounds jyunken (similar to the game of “rock-paper-scissors” played in the US) to whittle that number down. Sadly, I was knocked out in the first round, but one of my friends Kiyomi Yatsuhashi (shown above) was lucky enough to be among the chosen. Only the top two or three leaves of new growth are picked and dropped into the wicker basket at her side.

Even without the delights of the costume, there was a relaxing beauty of being in the tea field. Looking up the hillside, rows of tea bushes criss-cross the slope and electric fans gently whizz away any low-lying fog. Some of the bushes are shielded from sunlight with a loosely stitched mesh of vinyl ribbons. The covered bushes produce a lighter sweeter and more delicate tea, while tea from the exposed bushes is stronger and more astringent. 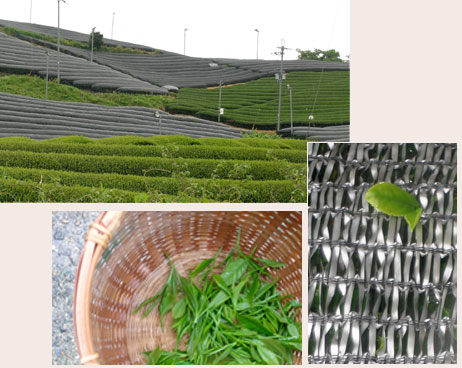 Sadly our rain-shortened venture into the fields produced only meager tea pickings, but these were battered and fried, then served as tea-leaf tempura with our lunch.

And a little P.S. on 5/17: One of the others on our trip just sent me this photo of the eight lucky people who won the chance to dress up in traditional tea-pickers clothing: 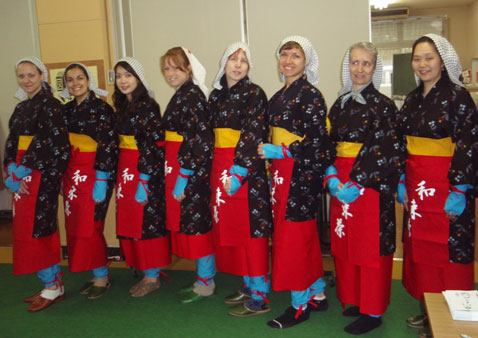 On the far right are my friends, Kiyomi Yatsuhashi and Moya Bligh. Third from the right is Aliona Yefimova from Lithuania, who gave me this picture.

In response to a request for pictures from my shopping spree the other day, may I present a dozen obi. 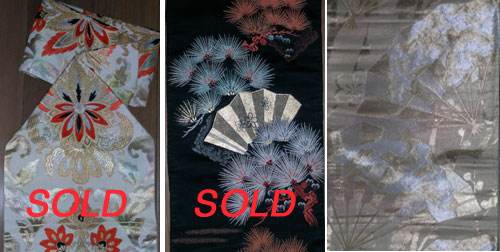 Of course, this is only a part of the collection….

What can one do with a dozen obi? There are a myriad possibilities. To jumpstart one’s imagination, I can certainly recommend Diane Wiltshire’s fabulous book, Design with Japanese Obi for home decor ideas.

And when it comes to handbags, accessories and wearables, oh my lord!, the sky’s the limit. They look fabulous patchworked with dupioni silk and they REALLY dress up denim…

Today was a glorious day in Kyoto. One of those gorgeous days when you feel spring turning into summer. We’ve had lots of rain this spring, which has turned everything lush and vibrant green, but today was warm and the sky was blue, making you feel summer on its way. And on a beautiful day like today, I had the chance to visit the warehouse of a vingage kimono dealer. I confess I didn’t know quite what to expect, but I did feel it would be a privileged peek into an inner sanctum of fabulous fabrics. 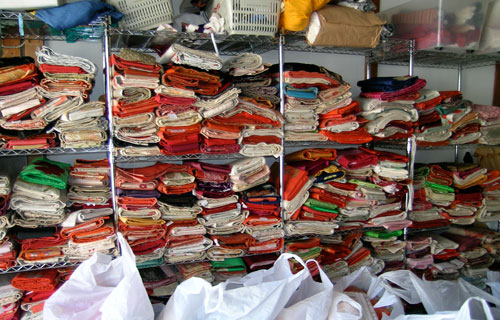 So it was kind of surprising to find the barren walls, metal rung shelving brimming with vintage obi and burgeoning plastic bags, sometimes spilling their colorful contents across the floor. And just stacks and stacks of fabrics everywhere. 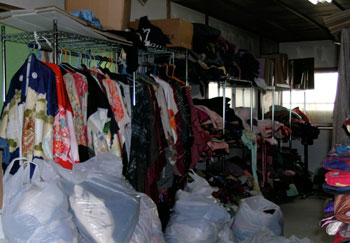 Unlike the flea markets, where vendors try to catch the eye of passing shoppers, this was purely warehousing with only narrow passages between the piles and bundles. If there was an order to this chaos, it was known only to the owner, as he confidently moved through his storehouse, pulling out a variety of items for me to swoon over. He seemed so amused as I oo-oohed and awed with each new offering. Although the years I have spent in Kyoto has allowed me to become a somewhat jaded veteran flea-market shopper, the sheer quantity of beauty packed into such a small space overwhelmed even me.

Pictured below is an embroidered wedding kimono. 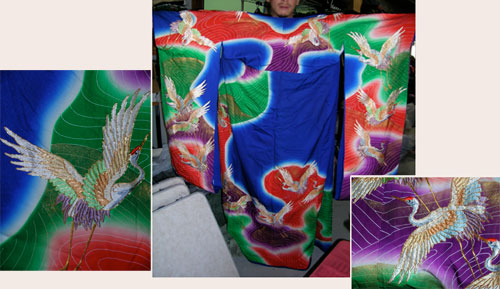 Click on the image for a closer look at the embroidered details.

I confess that within 30 or 40 minutes, I had spent every last dime in my pocket and on the ride home, my poor bike wobbled under the heavy load of my purchases. It was a glorious day.