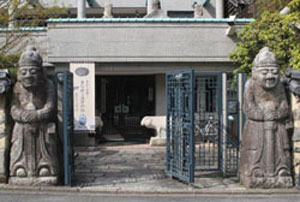 I guess you could say I’ve had a relatively wordless summer as I quietly worked on my stitchery, but it was never been my intention to allow so much time to pass in silence. Yet here it is September and I’m just now posting about some of the delights of my summer.

I did manage to find some time to spend at the Koryo Museum. It’s just a little place tucked into the north west corner of the city. Dedicated to traditional Korean art, their exhibitions are always a delight and this summer’s fare, was lotus-themed art. For this exhibition, they assembled a lovely collection of temple bells, rubbings, etchings, stone work, woodwork, metal work, textiles, paintings and ceramics that each featured the lotus in some part of the design.

Though many people are familiar with the lotus through Buddhist art, but the lotus actually has a history that well predates the introduction of Buddhism. Lotus plants are known to have existed in the Cretaceous period (140—165 million years ago) and for at least a millennia, lotus leaves have been used as wrappers, their edible roots and seeds appreciated throughout Asia and ancient literature described its flowers in the most poetic terms. It’s only natural that they would also have become a favorite decorative motif for a wide range of crafts. And as these images were transmitted down through generations, the motif evolved to become an elegant representation crossing through the cultures of an entire continent.

In keeping with its mission to display traditional Korean art, the pieces exhibited at the Koryo Museum were all from the Koryo (918—192 AD) or Chosôn (1392—1910 AD) dynasties of Korea. Koreans have always been renowned as particularly exquisite craftsmen and women. Korean potters, embroiderers, weavers were highly valued in the courts of Korea’s more powerful neighbors, China and Japan.At right is the lovely wood carving that graced the entryway to the exhibition proper, a candlestick in the shape of a lotus plant—it’s broad leaf forms the base, the blossom holds the candle and there’s even a cute little frog crawling up the stalk.

Alongside the king, there was a class of men known collectively as the yangban, who helped to govern Korean society during the Chosôn dynasty (1392–1910).

The yangban was comprised of civil or military officials, with civil positions being considered more prestigious. Members of the yangban were expected to hold public office, follow the Confucian doctrine of study and self-cultivation, and help cultivate the moral standards of Chosôn society, in essence, they comprised the literati of Korean society at that time. And in keeping with the dictum of self-cultivation, many in the yangban class were accomplished artists, practiced in calligraphy and ink painting, which were traditionally considered the two media most appropriate for the literati.

Creating paintings like the image of fish swimming among lotu at left would have been a favorite pastime of this group. And along with the creating the painting, a proper literati was expected to own an assortment of simple yet beautiful instruments, such as porcelain or wooden brush holders (11.142.1) and porcelain water droppers as well as an inkstone, brushes, and paper. These small accessories, along with refined yet unostentatious wooden furniture, were not only for personal use but also for display as indicators of his station in life. Which naturally led to the commission of even more elegantly crafted items, such as those displayed in the rest of the exhibit. 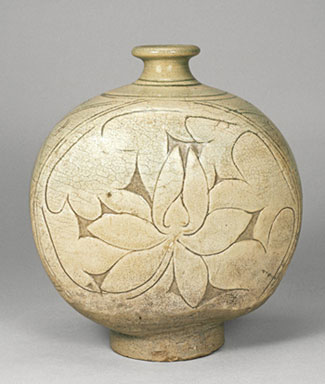 The ceramic flask at right is stoneware, covered with white slip and then carved to expose the darker clay body underneath. Quite typical of its time, this style is called buncheong ware, and was created in the southern part of Korea. This particular style was quite admired for Tea ceremony in Japan and imported as Korai chawan or Korean teabowls.

But perhaps the most famous style of Korean pottery would be celadon. The technique was orginally developed in China during the tenth century and later transmitted to Korea, but as Korean potters adopted and refined the technique, it evolved into a truly exquisite and uniquely Korean form. 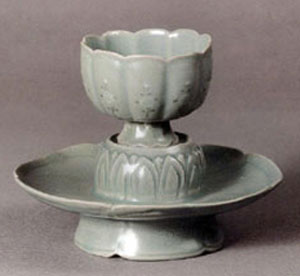 Of all the art in this exhibit, the teabowls are among the most elegant and refined. The tea bowl and saucer set shown at left was made from a delicately carved clay body, with incised designs that were inlaid red or white clay slip and then coated with celadon glaze and fired. When removed from the kiln, the inlaid slip appeared as white or black beneath the green glaze. On the cup at left you can see faint flower images on each carved petal that comprises the tea bowl, which in turn rests upon a beautifully carved lotus leaf saucer. 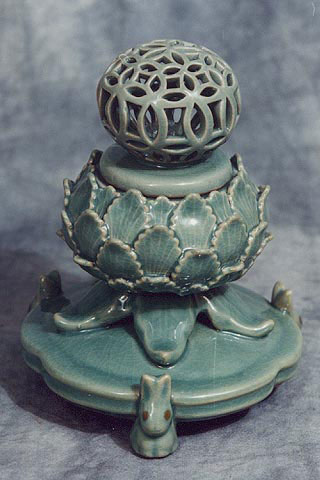 And as another celebration of beauty, this carved celadon incense burner dates from the Koryo dynasty and is thought to predate the teabowl shown above. Although there is only a minimal effort at the incised multi-colored slip inlay, it still features intricate carving and delicate humorous touches such as the “pedestal” of bunny rabbits on which the lotus leaf base rests.

Of course, being surrounded with so much lotus inspiration, how could I help but spend a good part of my summer making a bit of my own lotus-themed art? Last month I opened an extension of this site to sell my digitized embroidery designs. So far, my sets include not only Lotuses but also egrets and morning glories and more yet to come. May I invite you to visit my shop next door, simply by clicking here.