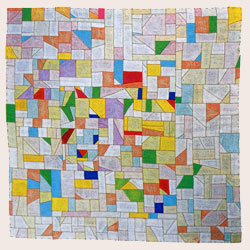 I confess I was a bit surprised that my last post sparked so much interest. I’ve been in love with pojagi since I saw an exhibit called “Patterns and Colors of Joy” at a museum in Osaka around 15 years ago. And since I’m aware of a modern pojagi artist, Chunghie Lee, who is quite active in the international art textile scene, teaching at the Rhode Island School of Design in the US and exhibiting at the Victoria an Albert Museum in London, I had thought that pojagi was better known. Techniques for creating textiles this luscious certainly deserve to be better known. So let me do my best to say a bit more. 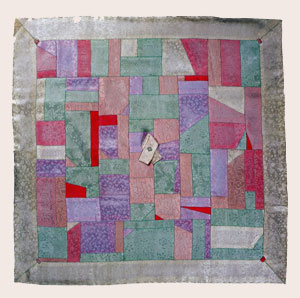 These first three examples show traditional pojagi from the Choson dynasty and all three were made from scraps of silk. Ramie, a bast fiber similar to linen, is another fabric commonly used to create pojagi. Fabric scraps were generally rescued from worn out hanbok, which is actually just a contraction for a longer term that translates simply as “Korean clothing”. Many of the elegant white on white pojagi made from ramie had once been petticoats or pantaloons. Some of those lovely white wrapping cloths show delightful variations of cream, ivory and pale yellow, because the garments from which the fabric scraps had been rescued had aged and yellowed at different rates and the seamstress worked those variations into her composition. 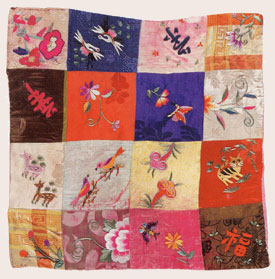 Often silk pojagi, like the one shown at right, include small embroidered designs that had once graced a sleeve or neckline. These treasured tidbits are carefully preserved and recycled into newly beautiful and graceful housewares. Small silk wrapping cloths might be used to wrap jewelry or porcelain, while ramie cloths might be used while serving food. One of the charming customs I observed during my recent trip was that food was initially presented covered with a lovely cloth. In the pojagi picture shown my previous post, you can see the foot of a wooden tray, peeking from beneath the pojagi and a mysterious object hidden beneath the cloth. Most likely that would be a pot of food. After the tray has been carried to the table, the cloth is dramatically removed to reveal the prepared food.

In the Choson period, the availability of scraps used to make pojagi was dictated by sumptuary laws. In the modern period and certainly in the west, there are few limitations on clothing choice. But throughout medieval Asia, many countries had strict regulations limiting the clothing choices of specific classes. In Korea, commoners could only wear muted colors, and the lowest classes wore undyed fabric. The upper classes were able to wear brighter colors, and of course, finer weaves of ramie as well as some silks were available. The brightest colors—red, blue, and yellow— as well as the most refined weaves were worn by the royal family. In particular, commoners were absolutely forbidden to wear yellow, since that color was thought to represent the center of the universe.

The fact that pojagi could and were made from any available fabric became absolutely clear to me during an exhibit I saw last September at the Koryo Museum here in Kyoto. One of the pieces on exhibit was dated from the 1950s and made from khaki green cotton twill. There were numbers stenciled in black on some of the patches. It had been made from old US army uniforms that had been given South Korean refugees during the Korean War. And when those clothes were worn out, they too were recycled as pojagi.

One of the things that makes pojagi special is the way the patches are stitched together. There are a number of different techniques, and the choice is dictated by the fabric being recycled. Shown above is a close up of a single hairline seam being made Notice on the left how tiny and closely overcast seam is stitched. This technique would be particularly applicable to a fine fabric like silk organza.

When I took a pojagi-making class here in Kyoto a few years ago, we used cotton embroidery floss to give a boldness to our seam stitch. Often a contrasting color is used, giving even greater strength to the stitch as a design element. In addition to the single hairline seam shown above, there are double and triple hairline seams, a flat fell seam using running stitches and several variant combinations of the two. One such combination of a hairline and running stitch is shown at right.

This kind of seaming technique gives the pojagi finishes the raw edges on the reverse side, leaving the pieced fabric light-weight and highly flexible. When made of sheer fabrics, like handkerchief linen or silk organza, the pojagi appear translucent like stained glass when held to the light. 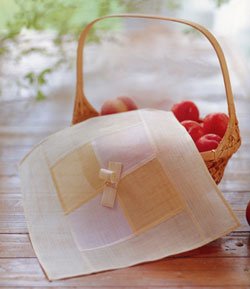 Pojagi crafts are quite rage in Japan with many centers and galleries offering classes to the public. A friend of a friend has become so enchanted that she even flies to Pusan, South Korea for regular lessons from a true Pojagi master.

Ramie is often a bit more difficult to find, but linen is regularly used as a substitute. And small home decor accessories like the simple basket cover shown at left are a frequent first project. Pojagi that are meant to be used as covers or lids often have a ribbon handle at the center. The ribbon is quite apparent in the picture at left, and can also be seen in the center of the second antique pojagi shown above. Those types of details provide historians with clues to the purposes for which an antique pojagi was made. Coarser fabrics, a larger size and reinforced corners indicate use in wrapping and tying up heavier bundles. Straps at one or more of the corners indicate the various types of cloths that were used for wrapping and storing precious items. 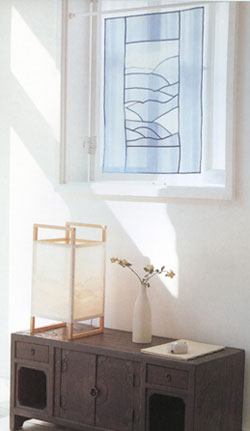 Other beginner projects include coasters and placemats or dresser scarves as well as a variety of small three-dimensional forms, just as it would have been for young Korean girls a century ago. Anything to practice the seaming techniques. Of course many of the works created by modern pojagi artists have moved beyond the traditional categories of usage. The window curtain at right is made of sheer linen in pale blue and white and seems to lean toward an abstract landscape, rather than relying on the traditional non-representational abstractions.

And then again, our hectic modern lives often offer too many distractions for the peaceful rhythms of hand sewing and so, there are some artists who replace the hand-sewn seams of traditional pojagi with incredibly narrow machine-sewn French seams. And as much as I find myself in that latter category, I still admire the fine handwork of traditional piecing techniques. 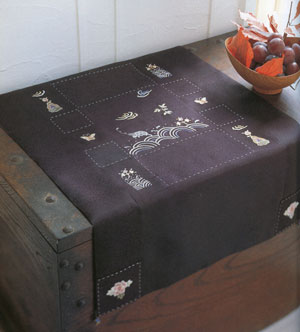 At left is a piece in indigo linen with hand embroidery and hand piecing. Even in this distant shot, it is easy to see how the running stitches in white thread accent some of the patchwork seams and add to the overall design.

Perhaps the best known of modern pojagi artists, in the West at least, is still Chunghie Lee. Below is an organza outfit she made in the mid-90s, which is still one of my favorite inspirational pieces. If you look closely, you can see that the model is wearing matching earrings made from three-dimensional balloon-like pojagi structures in the same colors as the skirt. There are a few more pojagi fashion pieces by Chunghie Lee in the archives of the website of the Victoria and Albert Museum. 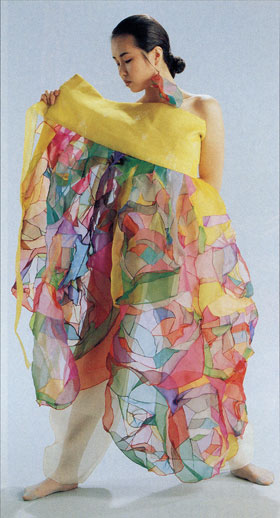 Leonie Castelino is another textile artist who incorporates pojagi as well as other East Asian textile processes into her reprertoire. I highly recommend a visit to her web-gallery as another source of pojagi inspiration.

Sadly I wasn’t able to find any English-language books on this topic to suggest further reading. All of the books and catalogues in my collection are in either Japanese or Korean. Although I am aware of a few US magazines such as Ornament and Surface Design that have printed occasional articles on pojagi, it would seem that the internet remains the primary resource at present.

And hopefully, my little bit of blogging on this topic has contributed something to making the beauty of Korean culture a little better known.