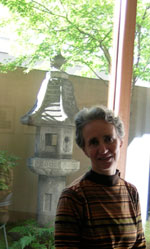 So often we in America conceive of the world as a series of bilateral relationships, but life abroad is simply broader. Exploring and appreciating a wider and more complex variety of international relations is one of the small joys of that broader world, and I suppose my Irish-American blood gets a particular trill from encountering the Irish-Japanese community.

Moya Bligh, a good friend from the women artists’ group in my last post, is a printmaker and woodblock artist from Kilkenny, Ireland. She came to Japan some 35 years ago on a Japanese government scholarship to study art and has lived here ever since. 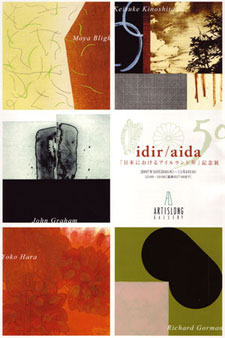 Now an art professor at Seika University, Moya recently curated a print exhibition, idir/aida – a celebration of Ireland in Japan at Artislong (life is short), a gallery here on the west side of Kyoto. The show marked the 50th anniversary of diplomatic relations between the two countries and featured five printmakers, three Irish and two Japanese, who had each studied and worked in the other’s country. The works reflected each artist’s interpretation of the cross-cultural influences in their shared experiences.

As delightful as the show has been, it is not an isolated phenomenon. Artists and writers from Ireland and Japan have been finding inspiration in each other’s culture for quite some time. In the late 1800s, Lafcadio Hearn, an Irish writer who became fascinated with Japan, translated and popularized Japanese ghost stories in the west and his books have continued in print for over a century. Contemporary Irish writers have continued the tradition with no lesser degree of fascination.

And the reverse is also true, I have several Japanese friends who regale me with stories of their lives in Dublin as we sit in one of the several Irish pubs that dot the cityscape of old Kyoto.

Added on January 29, 2009:
Much to my grief, my good friend Moya Bligh died yesterday, January 28, 2009, after a brief illness due to injuries sustained in a bicycling accident two weeks earlier. I am told that her passing was peaceful. The loss of Moya’s sweet spirit is grieved by very many, yet she will continue to live on in the hearts and minds of all who were blessed to know her.