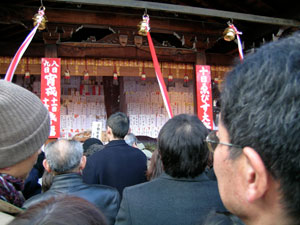 Once again I’ve had a lovely and langourous start to 2009, enjoying many of the Japanese rituals for welcoming each new year. Several were documented in my posts last year, but one that seemed to need particular attention this year is the Toka Ebisu festival on January 10th.

Ebisu is one of the seven lucky spirits, popular in northeast Asian mythology. Each of these seven deities represents a particular virtue and is the patron of one or more occupations. Traditionally, Ebisu was associated with the sea, sailors and fisherman, but became the patron of commerce and business during the Edo period. On the 10th day of the New Year, Kyotoites flock to the Ebisu shrine at Kenninji to say a prayer for good business in the coming year. This year, the shrine was filled to capacity with long lines of people waiting to say prayers for a more prosperous 2009. A limited sense of how crowded it was may be seen in the photo above, although you won’t quite feel the jostling of actually being in the midst of the throng. 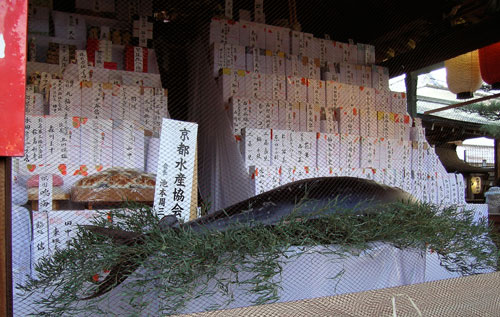 The altar was laid with a giant tuna and behind the altar, bottles of sake line the shelves. The crowds wait patiently as each individual takes their turn in ringing the altar bell loudly to attract Ebisu’s attention before saying their prayers and tossing a few coins into the collection bin.

But of course, no shrine pilgrimage would be complete without purchasing an omomori to carry home.

Although loosely translated as “good luck charm”, omomori actually function as a surrogate-self or double. When there is danger, illness, bankruptcy or other problems in the air, these nasties are attracted to the brightly colored omamori rather than to the individual or in this case, their business.

For that reason, the omomori is returned to the shrine the following year, so that omomori and all of the problems it has absorbed during the year can be ritually destroyed. Then of course, a new omomori must be purchased for the coming year.

The circular bamboo platter shown at top is decorated with images of both Ebisu and Daikokuten, the patron of farmers, as well as fish, rice, gold and a crane for longevity.

Below that is a similarly decorated bamboo rake. The rake is a favorite luck symbol for business people, since in Japanese as in English, the implied association is “May you rake it in!”

The red mobiles shown next represent crowds of customers flocking to your business. And then, for those who prefer a customized “charm”, there is a veritable smorgasbord of items to select from. These are attached to a bamboo frond that has been blessed by the dancing shrine maidens shown below. 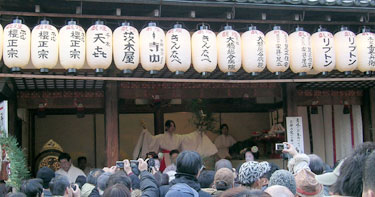 Of course, all of these luck charms carry fees that range from a few dollars to a few hundred dollars. If the luck can be purchased, you would already have to be fairly lucky to afford some of the larger omomori. 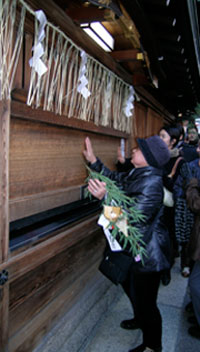 The final ritual before leaving the shrine is to pound the wooden wall along the back route out of the shrine. Ebisu is a prosperous old fellow and variously thought to have grown a bit deaf in his old age, a bit lazy with his success or a bit drunk on his many bottles of sake. Either way, Kyotoites believe it’s necessary to wake up old Ebisu and remind him of their prayers one more time before leaving. And this year the wall rattled thunderously as many hands gave the wall repeated and resounding thuds to wake old Ebisu up.

May 2009 be a better year, bringing prosperity and good fortune to us all.

2 thoughts on “Toka Ebisu Festival — Prayers for the world economy”